Coronavirus in Gamarra: the re-rise of the Peruvian textile emporium

Three points about the constant challenge of the Peruvian textile giant in the days of COVID-19. In addition, we spoke with the president of the Gamarra Business Coordinator, Susana Saldaña.  fotografía: PRODUCE

In its 60 years of existence, Gamarra has never before stopped its activity for such a long period. This textile emporium, considered one of the largest in Latin America, also had to abide by the Peruvian national quarantine, so it turned off its machines and closed all its stores.

With more than 40 thousand establishments and almost 60 blocks of expansion, it is a setting for production and trade -mostly textile- both retail and wholesale. Its reality is as wide as its size and its offer. Gamarra has success stories, formality and informality, high quality national products, dumping, creativity, counterfeit and dupes, among others. Probably this reality is the challenge that many do not dare or fail to assume.

Gamarra is historically the result of the effort of businessmen and entrepreneurs, mostly migrants. It was established in the Lima district of La Victoria strategically and its overflowing economic growth was followed by a geographical one. They advanced at a giant pace but devoid of urban planning or unified records, a situation that today more than ever they are striving to improve.

Owner of an important role in the national economy, the emporium has received strong political, economic and social blows in recent years. Now it is facing the global epidemic from the COVID-19 outbreak. How will Gamarra come back?

Between March 16 and May 13, more than 35 million made-up items entered Peru mostly from China according to figures provided by the Textile-Clothing Committee of the National Society of Industries (SNI). And not exactly from masks or medical supplies.

21.4 million garments and 13.9 million other garments (blankets, bed and table linen, etc.) were imported. Despite not being medicines, medical supplies or basic necessities, these were all allowed to enter -according to D.S N ° 044-2020- since transport and loading of merchadise was allowed. In mid-April of this year, Fast Not Fash asked the national shipping centers of Canada, South Korea, the United Kingdom, and Australia about their activities. All of them had suspended the departure of standard packages to Perudue to restrictions, flight cancellations and as part of the preventive measures self imposed.

In a statement, Ricardo Márquez, president of the SNI, indicates that in addition to the fact that a large part of foreign merchandise is undervalued, the real problem is that the imports are excessive and it diminishes the national production. "406,000 direct jobs are being affected," he says.

On the other hand, although there are companies that have been able to successfully turn from the heading to medical material -either importing or manufacturing-, a large percentage do not have the logistical or economic conditions to do so.

"Right now, the State needs to buy (medical or protection material). Companies that used to build roads now sell face masks. We who are the ones who could manufacture them, cannot operate or sell directly,” says the president of the Gamarra Business Coordinator, Susana Saldaña, to Fast Not Fash.

“Companies that used to build roads now sell face masks. We, who are the ones who could manufacture them, cannot operate or sell directly ”

“We need a well established way to access to these opportunities. We have proposed that we be admitted as a consortium in the calls for united to be able to cover the demand ”adds Saldaña. Alternatives like this would be attractive to the bulk of Gamarra's companies that are micro-companies. But if you want to sell to the Government, you need hands, machines, materials and, yes, capital. And money is what many lack.

Until 2017, almost 80% of Gamarra's workers were formal according to figures from the National Institute of Statistics and Informatics (INEI). Added to this, after the ordering operation in early 2020, approximately 20 thousand Venezuelans were part of the workforce, according to the Gamarra Business Coordinator.

Without commercial or productive activities, thousands of establishments have made the decision to reduce their sales and service personnel. Informal workers such as the "jaladores" -sellers on the streets- have moved to the surrounding avenues such as Humboldt, Grau or Aviación to market directly since they claim to have no other alternative to obtain income. According to the INEI's 2011-2016 National Household Survey, it is stated that a low level of education and poverty are favorable conditions for the emergence of informality.

On April 6, an economic plan was approved: Reactiva Perú, to grant financial aid through loans to national companies. The Ministry of Economy and Finance (MEF) allocated 30 billion soles and they are currently granted by banks and municipal credit houses. However, the distribution of funds by auction that the program implemented has benefited mostly large companies.

On the other hand, the Business Support Fund for micro and small companies (Mypes), theFAE-MYPE, administered by the Development Finance Corporation (COFIDE), is also supplied by banks and finance companies. This exclusive fund for micro and small companies has been in operation since March and has been assigned 300 million soles. Despite having 10 times more budget, the final credit rate can exceed 8%, thus being more expensive than one granted by Reactiva Peru.

"The private bank, having control, decides who gives it or not. Obviously they have as priority their best clients, but remember that we are in a crisis and we need to have access to those funds ”

““Gamarra is 99.5% micro-companiesMany work for the day to day and without production there is no food ”indicates the president of the Coordinator. It also mentions that they ran into interest rates of up to 15% in banks. In this way, state loans were more expensive than those of banks. "The private bank, having control, decides who gives it or not. It is quite a business for them. Obviously they prioritize their best clients, but remember that we are in a crisis and we need to have access to those funds, ”he adds. Along with five other unions, they presented a plan to the MEF , via congressman Daniel Olivares, to improve aspects such as requirements and review the impact of implementation on current plans. en los planes actuales.

Founded in 1998, the Gamarra Business Coordinator (CEG) is the main formal guild of the emporium. They are continuing registering companies and have launched an e-commerce platform for affiliates and non-affiliates. "Our main objective is to properly reactivate Gamarra as soon as possible," says Saldaña. In recent months they have formally presented many proposals to ministries, to the Congress and to the La Victoria Hall (MLV).

“We are still waiting for an efficient reactivation, without intermediaries. A direct injection of capital and Gamarra would need 3 billion soles ”, she indicates.

Among the fixed expenses of the merchants is the payment of rents. Gamarra has a square meter valued at USD $ 15,000 on average, one of the most expensive in Peru. There are also payments for pending merchandise, new material, debts and expenses in their respective homes. Without access to financial aid, many establishments will be forced to close in order not to return, since the majority, being micro-enterprises, lack substantial financial reserves.

"Gamarra has been contributing to our country for 60 years. We give more than 1,000 million soles to the national treasury every year. The gamarrino businessman has always set out on his own and now is the time for that path to begin again, but from the firm hand of the Government and all Peruvians, "says the union president.

"The gamarrino businessman has always set out on his own and now is the time for that path to begin again, but from the firm hand of the Government and all Peruvians"

The decent work and economic growth is a sustainable development goal. About this, the International Labour Organization recommends the use of microfinances to help those who are commonly excluded or benefited in low percentages. Among the measures is providing “advisory services to inform workers and sensitize central banks about the distributional effects of measures related to access to the financial market. This would help reduce vulnerability and "potentially increase your income." It can also become an attractive way to capture the informal percentage that should not be forgotten.

The Ministries of Production and Economy announced this week that changes will be made in aspects such as the limits of guarantees. Financial risk will still be considered, but companies "with potential problems" would be admitted. The Minister of the MEF, Maria Antonieta Alva, presented today May 29 changes in the maximum amounts of the program. The Gamarra union has not yet been able to meet with the minister but they hope to have the opportunity to do so to address the other points of their proposal. 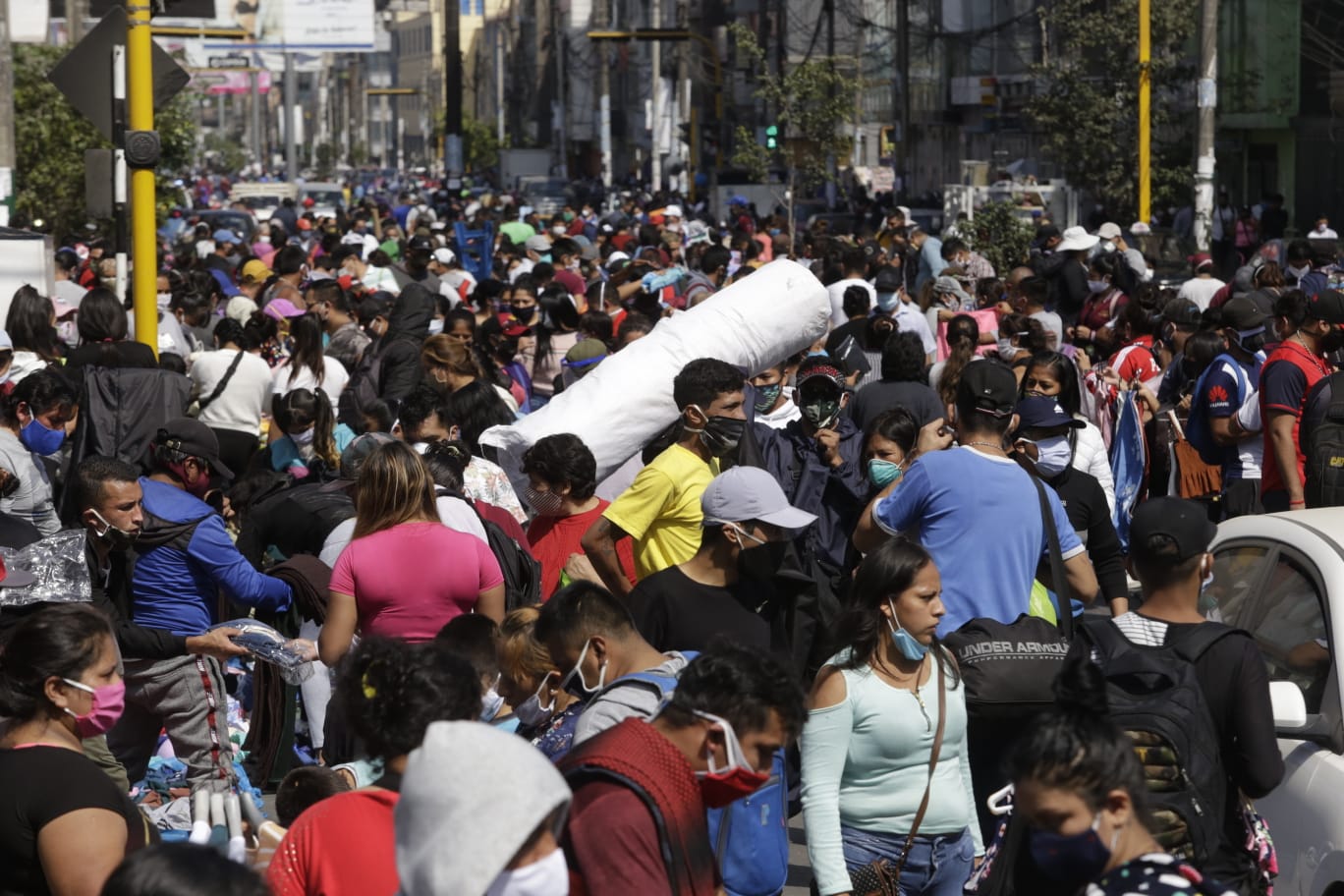 It looks like the image of a December 24rth in the afternoon but in reality it is from May 25th, 2020. It caused a stir on social networks because it graphs the greatest fear of the population in the face of the reopening of the emporium: the high risk of spread. Thousands of people took advantage of the end of strict quarantine to sell or move merchandise. "Those crowded people are informal sellers and are putting their own lives at risk." Saldaña mentions.

Gamarra has pretty unique characteristics. It is made up of thousands of companies, grouped in galleries, that lack the technical and capital knowledge to implement protocols individually. That is why the CEG, together with the Ministry of Production and a private consultancy, developed a sectoral biosafety protocol. “Once the protocol is approved, it will be necessary to implement it. That will take time. "We know that we are not going nor can we return to the past scenario and we are ready to do it in the best way, without risking anyone's life" This protocol is currently in the Ministry of Health for evaluation. 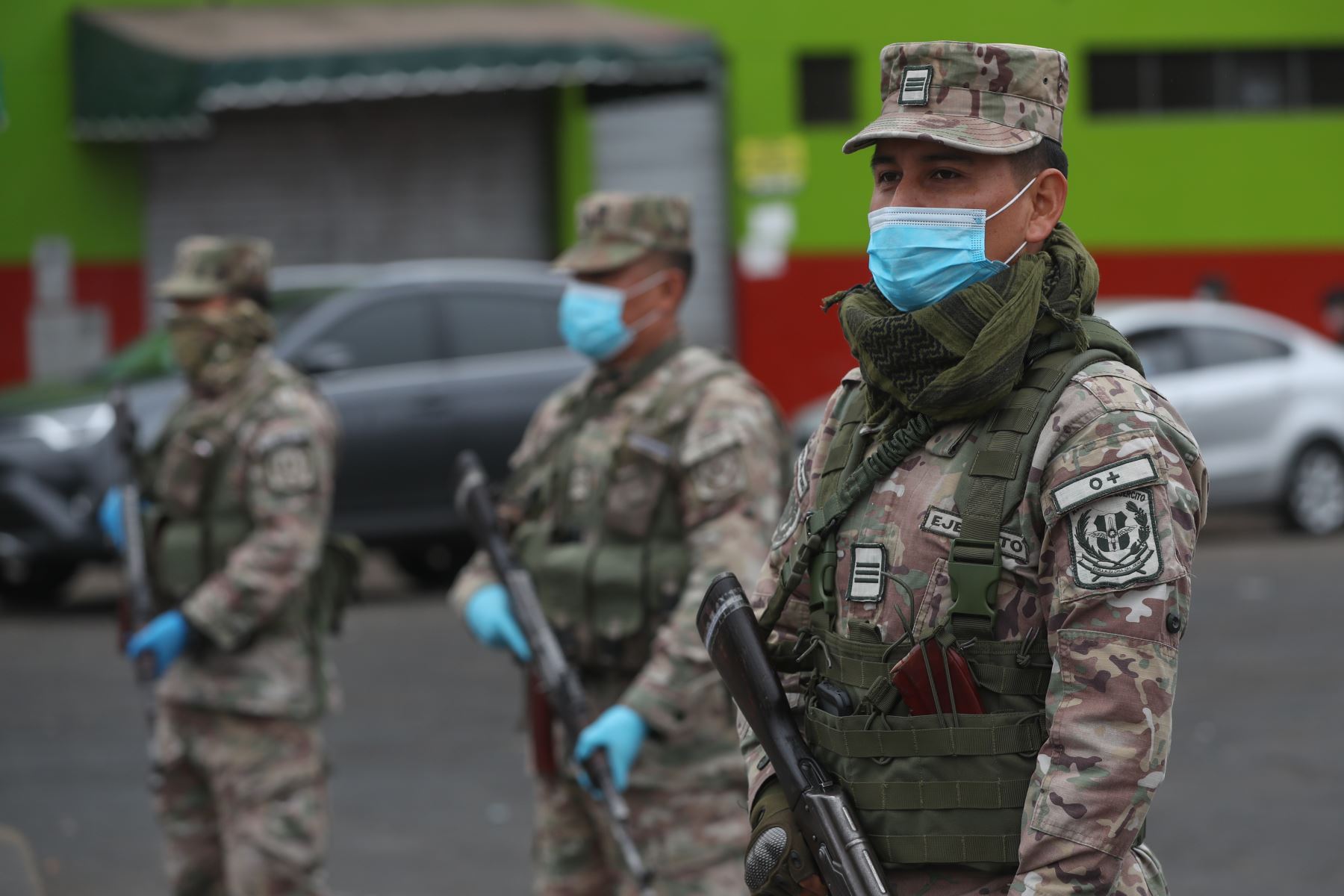 This other photograph is from 26 and responds to the request publicly sent by the Gamarra enterprises to the La Victoria Hall on May 4rth: the need for security reinforcement to protect the area and the eviction of the informal commerce present in the surroundings.

Gamarra gives more than 50 million soles in taxes and tributes to the Municipality of La Victoria as a result of its annual sales according to CEG figures. "From the coordinator we have presented proposals for health protocols to return to work because we are a unique industrial sector, but there are things that are beyond our responsibility."

Gamarra launched its online platform in mid April, Gamarraperu.pe . With this, the crowding of people will be avoided and the offer will be visible to all those who do not reside in the capital. In addition to clothing and accessories, you can already see here the Peruvian creativity imposed on personalized protection materials. Entrepreneurs claim to be aware of the Peruvian reality, where the majority have food and protection as a priority today.

All those who make up Gamarra receive the impact of the virus in one way or another. This is the common ground of a key piece in the national industry that receives more than 200 thousand daily visitors. Ultimately, it will be technical, political decisions and the support of the population that will help the most representative textile center in Peru to be reborn and not to repeat itself. Reinvention, after all, is not a privilege but an option.